Map out a treatment plan with your doctor

Important things to discuss with your doctor:

The MAC journey: A medical expert weighs in

Watch as Judy, a real patient, speaks with MAC lung disease specialist Dr. Lapinel about preparing her patients for what they may experience on the ARIKAYCE treatment journey.

I’m on this quest for knowledge to get answers for both you and me. Join me as I learn more about MAC lung disease and ARIKAYCE, from a researcher, a doctor, and a patient living with this disease. Let's get moving.

Today, we're meeting with the pulmonologist in New York who's been treating MAC lung disease for over 9 years. Although she was never my doctor, she's someone I've had the pleasure of meeting a few times before this.

One of the ways that I think I help my patients the most is by telling them that I really like to take a, a team approach to their management of care. My entire team is available, as well as myself, to be able to assist in any questions that arise, any complications that potentially may arise, so that we can make our patients feel that even though, this might be a long and complicated journey, that we have people that understand, that are informed about what they are going through, and are here to help every step of the way.

I think the whole diagnosis of MAC lung disease and NTM can be a very scary journey especially when you're first embarking on this and I, I sure wish I had known more at the beginning. That would have helped me along the process a little more quickly. I'm not even sure I could pronounce the name of it fluently the first few months. I would imagine, Dr. Lapinel, that it's sometimes challenging to measure how much a patient is really ready to hear. So, in your particular practice, how much how do you gauge that and how do you inform your patients so that they feel cared for and supported in this journey?

That's a wonderful question, right? Because everybody does come to the table having different backgrounds of information, everybody has different journeys, has different awareness of their underlying disease, and you want to inform people, but you also don't want to overwhelm them, um, for concern of, they may take a step back, but overall, um, you know I like to give a basic understanding of what the disease is, um, what the potential course may be, and that while we have different treatment approaches, it's tailored to that individual patient.

I sometimes hear from other people that they don't want to start MAC treatment right away, what do you think?

I really feel that the decision to start treatment is one that needs to be made individually. In many patients as we've learned more about the disease, I caution them that if they are not started on treatment, that it can lead to a worsening of their underlying lung disease over time. And so to that point, I follow the NTM treatment guidelines that recommend treatment over watchful waiting. And the goal of that treatment is to test MAC-negative. The guidelines do in fact discuss the length of treatment and they usually mention that patients should remain on treatment for at least 12 months from the time that they first convert to culture negative. So, somebody that has, had been MAC-positive converts to MAC-negative they must continue treatment for at least 12 months from that point. We want to do everything that we can, to help treat it, and clear it, and prevent it from coming back.

When you say MAC lung disease is difficult to treat, like it was for me, you probably have other patients that it's the same?

And that's why for my patients, that I do decide to start on treatment when we discuss the oral antibiotic regimen that we're putting them on, I actually bring up ARIKAYCE early on in their diagnosis. We are going to follow the guidelines and treat with proven therapies, so the addition of ARIKAYCE is strongly recommended for patients that continue to test positive after six months of treatment. These are points that are really important to know and so I really encourage patients to speak with their physicians when they're embarking on their treatment journey.

So when you found out that ARIKAYCE was approved what was your reaction?

I was very happy, there was almost a sense of relief. Now we have this drug that's FDA approved, in a limited population, for patients that continue to test positive after six months of a multidrug treatment regimen.

I think a lot of patients want to know what are the chances that ARIKAYCE is going to work for me?

When patients ask me that, I like to refer them to the data from the study on which, for which ARIKAYCE gained you know its FDA approval. So let's head inside to my office so we can review some of the clinical data so I can answer your question a little bit more clearly.

It was so interesting to meet Dr. Lapinel and to hear about her range of experience.

Many patients just wanted to know what we could experience on this journey. It was refreshing to hear doctors also find this disease frustrating. After all, we're in this together.

Let's see what we can learn at our next stop. 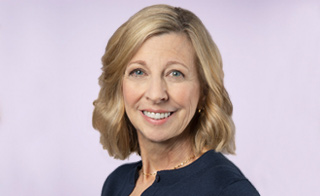 “ARIKAYCE made me feel hopeful that I could get this disease under control.”

Lynn had long searched for help with her MAC lung disease. When she met Dr. Lapinel, she knew she had found a partner for her treatment journey.

My name is Lynn, I’m 67 years old and I live in Pearl River, Louisiana.

My name is Dr. Nicole Lapinel and I’ve been in pulmonary critical care for the last few years.

Lynn had had a long path—diagnosis, you know, many years before she had actually met me.

When the infectious disease doctor became aware that I had NTM, she told

me about a doctor who was involved in treating NTM, which is Dr. Lapinel.

I was very impressed the first time I met you, I was impressed with the

abundance of knowledge that you had about this illness.

That makes me feel very, very good to hear that. Very comforting for me as a physician.

My first visit was involved. I was a bit intimidated and overwhelmed at this point because it was just so much information for me to absorb.

During that first appointment, I always try to get as much of that

background history as I possibly can. So, all of that is important in terms of setting our pathway, setting our treatment regimen up and everything like that, getting more of that history. And I hope that even though it was overwhelming to kind of hear all that, that you had a sense that we are going to be taking this kind of step by step.

We had put you on a daily regimen and discontinued one of the antibiotics that you were on and then added two more antibiotics to that regimen on that very, very first visit.

I wasn’t excited about taking more medication, but I felt hopeful for the

first time in a long time of being treated properly.

When Dr. Lapinel told me that my sputum samples were still coming back

positive, I was disappointed. I had a lot of hope that I would see more of a result at this point.

Treatment can potentially not be successful for a variety of reasons. That is something that we also talk to our patients about in terms

producing positive sputum samples, that we were going to add to the medication I was already taking.

So, it was actually six months into your regimen when cultures were

still positive that we actually decided to add a new medication, an inhaled antibiotic, which is called ARIKAYCE.

Knowing that ARIKAYCE was available for people like me, made me

feel hopeful that I could get this disease under control.

I felt confident that this was the appropriate addition to the regimen, because for the first in its time for MAC lung disease, we actually had an evidence-based approved medication that was also FDA approved.

Whenever we’re introducing new medications, we like to go over those side

effects because that’s…that’s part of handling the treatment. I always discuss cough because so many patients are already suffering with cough.

So, I was prepared for just what she said, the cough, the hoarseness, and the shortness of breath. But she also gave me ideas on what I could do to make it better.

I did keep track of my side effects. I took personal notes so that when

I did see you I could relay them to you and not leave anything out.

I enrolled in the Arikares Support Program. They have been very, very

helpful to me. Someone has come out to my house initially to educate

me on how to use the medication. If I had a problem all I had to do was

make a phone call and somebody was always there to help me immediately.

I’ve actually heard truthfully from many patients that they’re very satisfied with the support that they provide through the program.

within that first six months of treatment on ARIKAYCE. And so that was a very welcoming sign that we were finally getting the effects, you know, that we had hoped for.

When I found out that my sputum sample was negative after taking ARIKAYCE, I was very excited, and I was very grateful.

I appreciate you, Dr. Lapinel. You made sure that I got all of the

proper treatments. You didn’t give up when one of them or three

of them didn’t work, you added to it to make sure that we continue to try to fight this illness.

I appreciate you, the commitment, how seriously you’ve taken this. And just overall being just a wonderful, agreeable person to, to kind

of go with on this journey.

I think that all of the work that we’ve done, all of the treatments that she has recommended and put me on, everything through all of this time has been so successful.

My advice for someone just starting ARIKAYCE is to be positive and take one day at a time. As of today, I’m still MAC-negative.

I feel good about the future.

Next: Understanding possible side effects

IMPORTANT SAFETY INFORMATION AND INDICATION ARIKAYCE is associated with: risk of increased respiratory adverse reactions including allergic inflammation of lungs, coughing up blood, severe breathing problems and worsening of COPD.

ARIKAYCE can cause serious side effects, including:

Do not use ARIKAYCE if you are allergic to any aminoglycoside, or any of the ingredients in ARIKAYCE.

Before using ARIKAYCE, tell your healthcare provider about all medical conditions, including if you:

Tell your healthcare provider about all the medicines you take, including prescription medicines and over-the-counter medicines, vitamins, and herbal supplements.

ARIKAYCE may cause serious side effects, including:

The most common side effects of ARIKAYCE include: changes in voice and hoarseness (dysphonia), cough during or after a dose of ARIKAYCE, especially in the first month after starting treatment, muscle pain, sore throat, tiredness (fatigue), diarrhea, nausea, headache, fever, decreased weight, vomiting, rash, increased sputum, or chest discomfort.

These are not all of the possible side effects of ARIKAYCE. Call your doctor or pharmacist for medical advice about side effects. You may report side effects to FDA at 1-800-FDA-1088 or www.fda.gov/medwatch.

It is not known if ARIKAYCE is safe and effective in children younger than 18 years of age.

This product was approved by FDA using the Limited Population pathway. This means FDA has approved this drug for a limited and specific patient population, and studies on the drug may have only answered focused questions about its safety and effectiveness.